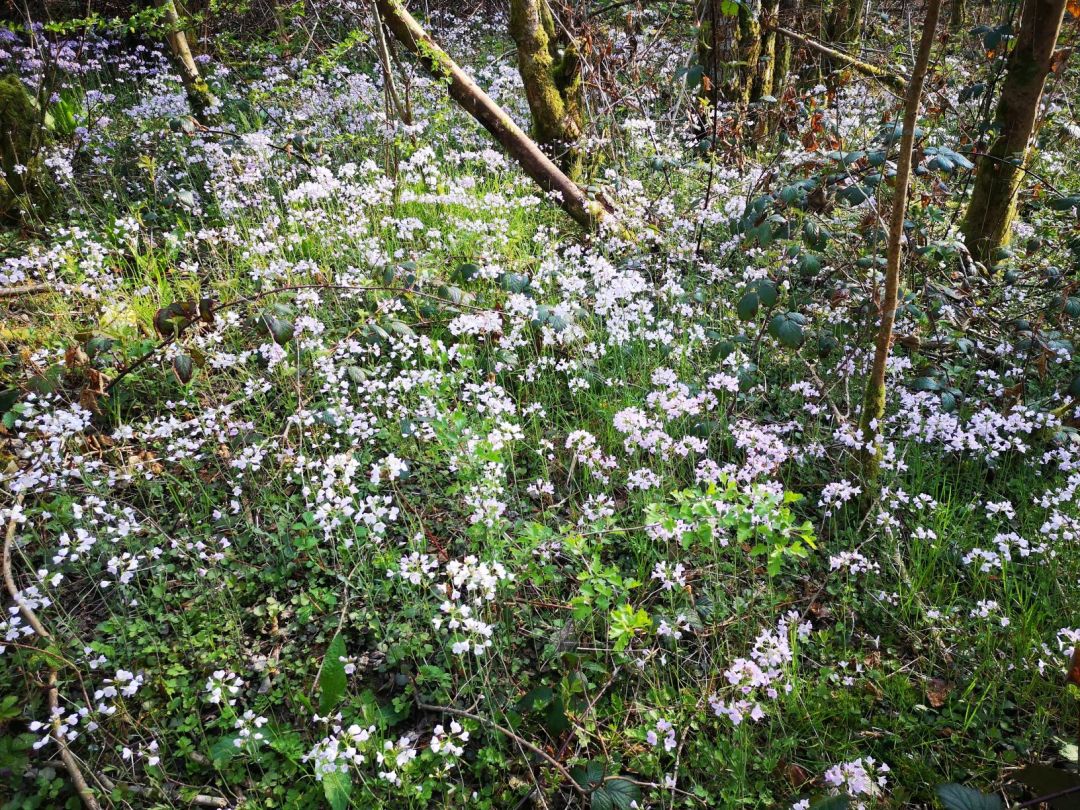 Woods are Blooming and Birds Returning

We are so lucky in Cuckfield to have two beautiful woods right on our doorsteps. In both New England Wood and Blunts Wood the bluebells are on the very verge of exploding into their annual sapphire blue. Bluebells flower anytime between mid-April right to late May depending on how mild the weather has been. They are quite early this year so can be seen right next to white wood anemones, vivid yellow lesser celandine, and the beautifully fragile looking light pink cuckooflower. The cuckooflower (aptly named for Cuckfield!) seems to be more abundant this year than last year when my daughters and I were taking our Covid exercise in New England Wood nearly daily, watching the seasons pass. This year there are large sun-speckled patches of the pretty flower near the banks of the stream in Blunts Wood, a habitat they prefer. Also known as lady’s smock, the cuckooflower blooms from April until June which coincides with the arrival of the cuckoo from sub-Saharan Africa.

Whilst thinking about cuckoos I came across a tracking project run by the British Trust of Ornithologists. One particular bird, named PJ, is as I type, in Southern Spain and has flown all the way from Angola, through Gabon, Togo, Ghana and crossed the Sahara Desert. PJ will finally make it to Suffolk where he will breed before turning round in July and making the whole epic journey back again – awesome. I know cuckoos get a bad reputation for using other species nests and parents to bring up their own oversized chicks, but you have to respect such an incredible journey. Hat’s off to PJ!  https://www.bto.org/our-science/projects/cuckoo-tracking-project.

I haven’t heard a cuckoo yet this year, but I think I spotted another of the epic travellers last week – a swallow. My very favourite arrival though, is the sickle shaped form of the swift. Incredibly swifts make their 5000 km migration from West Africa to the UK in only five days – swift indeed! When the young start flying in June and July you might hear their high-pitched calls (screaming parties) as they swoop and roll over our gardens and roads. My Dad’s garden in Warninglid gets a particularly exciting aeronautic display each year. If you are lucky enough to live near a swift nesting site or see a screaming party the RSPB would love to hear about it. Numbers of swifts have dropped over the last decades and mapping where they nest can help organisations such as RSPB and Action for Swifts work out which areas need protection and where to provide nesting boxes.

https://www.swiftmapper.org.uk/. The swifts should be with us any day now – exciting.

Providing a place for Cuckfield-based “green” groups to unite under one umbrella to help Cuckfield become a more sustainable community. View all posts by GreenerCuckfield